December 17, 2020 Dawn Crescent's Code News Comments Off on 14 million American households are at risk of eviction as protections expire

Fort Lauderdale, Florida (CNN) — John Ayers’ face filled with pride as he listed everything he used to be able to afford as an insurance agent — $2,000 monthly rent, hundreds of dollars in prescriptions for his severe arthritis and diabetes, and even a regular Uber driver, known as Fast Ice, to take him grocery shopping in a black Mercedes-Benz van.

But the pandemic — which Ayers described as a “wicked, giant octopus with very long tentacles” — upended his life.

“Fortunately, I haven’t gotten the virus, but I’ve fallen victim to it,” Ayers said recently, sitting outside the rental home in Fort Lauderdale, Florida, where he lives with his certified companions Bella and Bear — a red nose pit bull and a pit bull mix.

Stimulus checks aren’t in the bipartisan relief proposal. Here’s what Congress is offering instead…

His eyes filled with tears as he described losing his job early last summer, exhausting his savings paying for rent, medications and utility bills, and getting slapped with an eviction notice.

With the pandemic as a backdrop, more than 14 million American households are currently at risk of eviction and have an estimated $25 billion in rental debt, according to a report by Stout, a global investment bank and advisory firm. And 4.9 million of them are likely to receive eviction notices in January after the Centers for Disease Control and Prevention eviction moratorium expires on December 31, Stout found.

Help is not in sight, as negotiations over relief continue to stall in Congress. Despite efforts by state legislatures to fill the gap, states have run out of money. While Washington drags its feet, hardworking Americans around the country are on the brink of financial ruin and homelessness in the middle of a raging pandemic.

“Any meaningful pandemic mitigation strategy must include robust rent relief and eviction moratoria, or interventions will be thwarted,” said Emily Benfer, a professor at Wake Forest University Law School and co-creator of the Eviction Lab Covid-19 Housing Policy Scoreboard, a dataset of evictions in America.

Tenants in Florida are among those at the highest risk of eviction, according to Benfer, in part due to the lack of tenant protections like rent control and late-fee restrictions. More than a million renters in the Sunshine State have “slight or no confidence” in their ability to pay next month’s rent.

Thousands of evictions have been filed in Gainesville, Jacksonville and Tampa since March 15, according to the Eviction Lab project.

In Broward County, evictions are expected to triple during the first three months of 2021, from 5,000 to 15,000, according to Administrative Judge Robert Lee of Broward County Court.

With all court proceedings held virtually, Lee said, he has told his team of judges “we’re going to have to roll up our sleeves.” To meet the skyrocketing demand, judges in the criminal, medical and insurance claims divisions are being diverted to hear eviction cases, said Lee. He is also boosting support staff and mediation teams who offer free services paid for by the county.

Patrice Paldino deploys attorneys to food-lines to help tenants fight to stay in their homes.

Patrice Paldino deploys attorneys to food-lines to help tenants fight to stay in their homes.

Pro bono attorneys are bracing for what could be a “tsunami” of eviction cases in southeast Florida in the new year, says Patrice Paldino, executive director of Coast to Coast Legal Aid of South Florida.

Many tenants think they have eviction issues but once they consult attorneys, Paldino says, they realize they also have garnishments, credit card debt and other collections. Some of her current eviction clients are seniors, veterans and people with disabilities.

“I believe housing is health care and you have to keep people in their homes for their mental, physical and emotional health,” Paldino said.

Paldino has hired three extra attorneys. Due to the surging pandemic, she deploys some of them in the community in a “mobile justice” van retrofitted into a law office, with a walk-up window. Lawyers and clients are separated by acrylic glass for safety.

Evictions are linked to an increase in Covid-19 infections and death because they result in overcrowded living environments, limited access to health care and an inability to social-distance or exercise hygiene, Benfer’s research shows.

“The United States’ repeated failure to address the eviction crisis is jeopardizing lives and the health and well-being of the nation,” said Benfer.

In Miami-Dade County, homelessness is on the rise, according to Ron Book, chair of the Miami-Dade Homeless Trust. The call volume at Camillus House, the trust’s shelter, increased from an average of 800 calls a month to 1,200 last month.

“I’m deathly concerned,” Book said. He fears the “floodgates” of homelessness will open and thousands of people, including senior citizens, will be on the streets once the CDC moratorium ends.

More than 6,400 evictions were filed from March 13 to November 30 in Miami-Dade County, according to a county courthouse spokesperson. Book estimates those evictions could impact about 18,000 people. 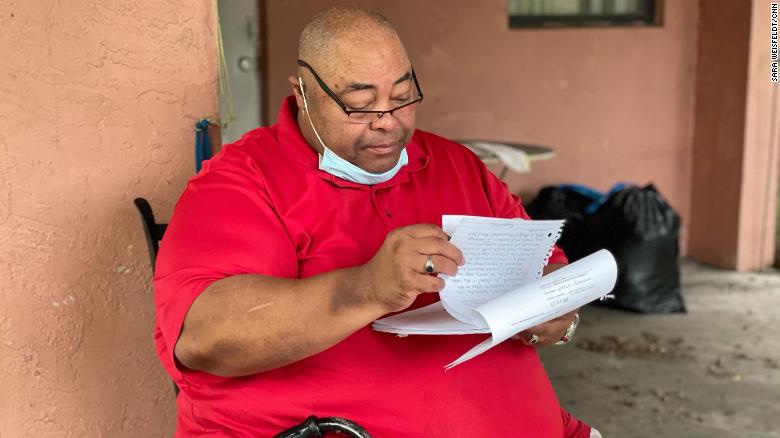 “The fact is that we’re going to lose lives in a massive potential proportion if we don’t find a way to solve keeping people in their homes,” Book said.

As for Ayers, he’s still looking for a job. He can’t afford his medications, and short of a miracle on his Gofundme page, he’ll be homeless on New Year’s Day.

“[Being] hungry I can deal with,” Ayers said, sobbing. “It’s the thought of being out there [on the street] with a dog.”

In the midst of his desperation, he counts one new blessing: Fast Ice now drives him to the grocery store free of charge.

“There are still people in this world who have a kind heart and a wonderful spirit,” Ayers said.