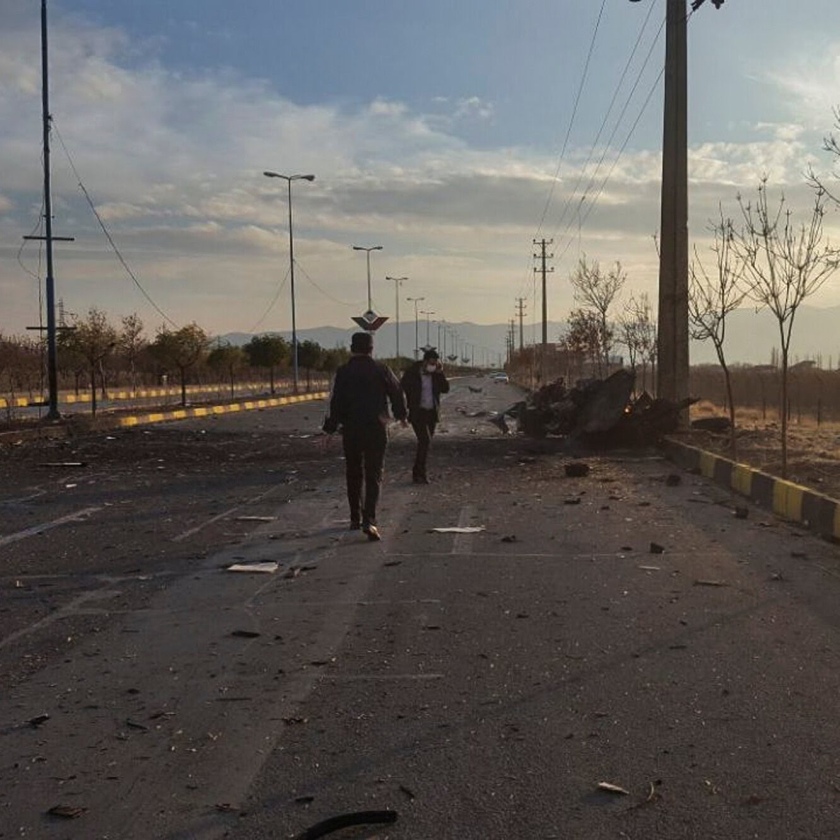 (NY Times) – We chase the criminals to the end,” the Iranian defense minister said at the funeral of Mohsen Fakhrizadeh.

The Iranian defense minister vowed on Monday to find and punish those responsible for the assassination of Iran’s top nuclear scientist, while another senior official offered an account of the attack radically different from initial reports in the Iranian state news media.

“We chase the criminals to the end,” the defense minister, Brig. Gen. Amir Hatami, said at a ceremony mourning Mohsen Fakhrizadeh, who was shot and killed outside Tehran last Friday while traveling with his bodyguards.

Iranian state news outlets initially reported that gunmen had killed Mr. Fakhrizadeh in a roadside ambush after a truck explosion — and even interviewed a supposed witness. But speaking at the funeral on Monday, Ali Shamkhani, the secretary of the country’s Supreme National Security Council, said that Israel had carried out the attack using sophisticated “electronic devices.”

He did not elaborate, but the Fars news agency, an affiliate of the Revolutionary Guards Corps, said the assassination was carried out with a machine gun operated by remote control.

The new version of events, which could not immediately be confirmed, seemed to represent a coordinated effort at damage control by the nation’s security apparatus after a public and official backlash after the embarrassingly public assassination of Mr. Fakhrizadeh, which Western intelligence officials have said was carried out by Israel.

At the funeral at the headquarters of the Defense Ministry, photographs and footage showed a procession carrying Mr. Fakhrizadeh’s coffin, covered with flowers and draped with the Iranian flag.

It was the latest of expression of fury at the death of Mr. Fakhrizadeh, who for two decades was the brains behind what American and Israeli intelligence described as Iran’s covert nuclear weapons program, though Iran maintains that its nuclear program is for peaceful uses only.

But on Monday General Hatami said that the death of the scientist, whom he called a martyr, would make him a model for Iranian youth and only strengthen the nation’s resolve to forge ahead with his work.

Though he did not specify how, General Hatami said the country would take to heart the commands of Ayatollah Ali Khamenei, Iran’s supreme leader, to punish the perpetrators and commanders behind the killing. Tehran is assembling an elite group to capture and prosecute the perpetrators, Iran’s judiciary chief, Ayatollah Ebrahim Raisi, said on Monday. Members include the attorney general and select members of the armed forces and intelligence services.

A protest in Tehran on Saturday against Mr. Fakhrizadeh’s assassination.Arash Khamooshi for The New York Times

“Once again, the evil hands of global arrogance and the Zionist mercenaries were stained with the blood of an Iranian son,” the Iranian president, Hassan Rouhani, said on Saturday, echoing phrases that Iranian officials often use in reference to Israel. He added that the country would respond “in due course.”

After that threat, Israel on Saturday put its embassies around the world on high alert, Israeli N12 News reported. The country’s Foreign Ministry said it would not comment on embassy security matters.

The calls for retribution heightened concerns that the situation could escalate. Over the weekend, Germany urged all sides to refrain from retaliatory actions in the last weeks of the Trump administration to preserve hopes for renewed negotiations over Iran’s nuclear program once Joseph R. Biden Jr. assumes the presidency.

Under the 2015 nuclear accord between Iran and six world powers — a signature foreign policy milestone of the Obama administration — Tehran accepted strict restraints on its ability to produce as much nuclear fuel as it wanted. President Trump withdrew the United States from the deal in 2018 and reimposed stringent sanctions on Iran.

Mr. Biden is expected to try to restore the accord, perhaps adding limits on Iran’s production and export of sophisticated weapons, but the killing threatens to complicate that effort. Iran’s reaction over the next few weeks is likely to determine whether it will succeed, analysts say.