Marquis Ventura, 35, was collared about 3:30 p.m.by transit officers who recognized his face from wanted pictures and video released after the bizarre Oct. 1 attack.

Ventura was hit with second-degree assault and was awaiting arraignment. 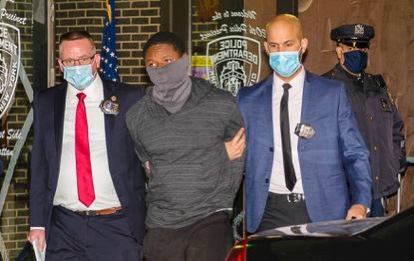 Marquis Ventura is escorted by NYPD Detectives from the 20th Precinct. Ventura, 35, was collared about 3:30 p.m.by transit officers who recognized his face from wanted pictures and video released after the bizarre Oct. 1 attack. (Jeff Bachner/for New York Daily News)

Moranis, 67, was walking south on Central Park West near W. 70th St. around 7:30 a.m. when a man dressed in a black “I Love New York” hoodie with a backpack slung over his shoulders punched him with a closed fist, police sources said at the time.

He went to a nearby hospital to be treated for pain in his right hip, head and back, and then to the 20th Precinct stationhouse on the Upper West Side to report the confrontation, authorities said.

“Rick Moranis was assaulted on the Upper West Side yesterday,” his agent Troy Bailey told the Daily News after the attack. “He is fine but grateful for everyone’s thoughts and well wishes.”

“He just wants us to catch the bad guy all this to go away,” Det. Kaz Daughtry said at the time.